Deliver in Haste, Showing through December 2018
Transporting the Mail from, to and through The Dalles, 1830-1890’s
Closing the first week of January 2019

Columbia Gorge Discovery Centers current exhibit is about the physical and sometimes arduous  history of communication. This is a fascinating, visual journey of how mail, has moved through The Dalles from the early 1830s through the 1890s. Original letters and envelopes, along with period paintings, photographs, documents, and related artifacts, are presented as testament to the transportation challenges our forefathers  faced to just keep in touch. 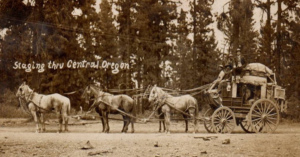 The exhibit focuses on the importance of mail as it was the only way the earliest non-Indian residents in the Pacific Northwest could communicate with distant family and friends and conduct far-away business. In the 1830s and 1840s, letters were carried via Indian canoes on the Columbia River, or by foot or horseback on barely discernible trails. In the 1850s and 1860s, post offices were established and contracts signed for carrying mail by steamboats and stagecoaches, although much mail was privately carried by express companies. By the mid-1880s, railroads became the preferred option.

Each delivery method is explored with detailed content of letters and images and the ever changing circumstances that went with each transportation mode. Rapids, hostile trails, inclement weather days on end. Each step of the way the personal hand written words would somehow make their way to the intended recipient. Sometimes the letter might be addressed to a missionary or individual, “Beyond the Rocky Mountains” or to a specific mission. Astonishingly, such letters were received!

Because of its location, The Dalles continued to serve as a hub for the various transportation methods through the years and provided a touchpoint for communication.
The exhibition is a collaborative effort presented by Dale Forster plus Glenn and Judith Mason.

Dale Forster is a fifth generation Oregonian with a keen interest in 19th century Pacific Northwest postal history. He is the author of the 1985 book, “Oregon Express Companies”, documenting the role of private mail carrying companies. In the 1860s these companies served the gold mines of Idaho and Eastern Oregon through The Dalles.

Glenn Mason retired after almost 30 years in the history museum profession in 1999.  Moving to Portland from Spokane, he and his wife, Judith, formed Cultural Images and specialized in museum / historical society / special collections consulting and project contracts.  Glenn and Judith also are dealers of 19th and early 20th century paper ephemera, vintage photographs, and fine and unusual books.  Glenn, who has authored books, catalogs and articles about Pacific Northwest history, currently serves as a national board member of the Ephemera Society of America.

Judith Mason is a partner with Glenn Mason in their Portland company Cultural Images, which specializes in working with museums, libraries, historical societies, and other cultural institutions.